The skill of trapping is one of the most fascinating yet controversial aspects of Bushcraft. In an ideal world it wouldn’t be necessary for us to learn how to capture and kill our fellow creatures at all; we could simply forage for plants nuts and berries in order to meet our nutritional needs.

Unfortunately, in reality, if we were to adopt this strategy in the majority of wilderness situations, we would eventually starve. A good knowledge of edible plants is an important survival skill, and consumption of vitamin rich plants are an important part of a balanced diet because they help to maintain a robust immune system, and good general health. However; foraging uses energy in the form of calories from food, and in order to replace these calories we would have to consume vast quantities of plant materials which would require even more calories.

This is the vicious circle faced by our prehistoric ancestors, and hunter gatherers throughout the world. They may not have known the names for calories, protein and fats, but they would certainly have known hunger, and they would have noticed the increased energy and feeling of satisfaction they experienced after eating a nutrient rich food like meat. They may even have equated this feeling as the spirit of the animal itself becoming a part of them.

The more macho minded survivor may assume that the best way to obtain meat would be to run off in pursuit of large game animals, such as Deer. Armed with a bow and arrow or other impressive weapon, they would walk for miles tracking the animals that they hoped to hunt. They would then have to wait until an animal came into range. If they got lucky and killed a deer they would have to carry its carcass back to their camp site where it would be butchered and prepared for eating. All of this requires energy, and while the body of a large animal would provide a substantial amount of calories and protein, it would also require a vast amount of energy expenditure in order to obtain it. What if the hunting trip was unsuccessful? If they return to Camp without any meat, after burning up thousands of calories in pursuit of food, they would go to bed hungry and wake up hungry. They may not even have the energy to head off on another hunting trip, and without a local Spar ™ to fall back on, they would quickly starve. 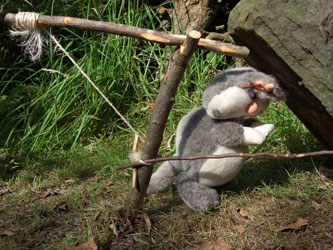 The savvy hunter gatherer would know better than to rely on hunting in order to fill his belly. He or she would also have an extensive knowledge of trapping techniques that could be used in order to catch small or large animals, using the minimum of energy.

Anyone in a survival situation would be wise to have such a repertoire of trapping techniques that they could employ if the situation required it. Many traps can be made from natural materials, as well as materials salvaged from a vehicle (Such as copper wire etc).

Lofty Wiseman, author of the classic SAS survival handbook, uses the memorable formula of Mangle, Tangle, Strangle and Tangle, to categorise the types of traps that can be used in a Survival situation. The trap you use will depend upon the game that you intend to catch, as well as the materials available to you, and the terrain in which you intend to use them.

The following trap is most certainly of the Mangle variety, as it is designed to drop a heavy weight onto an animal, killing it instantly.

The trap is a modified Paiute trap which was used by the Paiute Indians of Nevada and Utah, to catch small mammals. The Paiute live in a barren rocky environment where large game is scarce, and small mammals as well as reptiles and insects formed the bulk of their diet.

In order to make a Paiute trap you will require the following….

Find a large flat stone which can be lifted up from one end without rolling. You may need to use small stones or twigs under the stone to prevent side to side movement. Concrete building blocks are good to practice with because they are of a uniform shape and balance well. (I have used this trap with concrete blocks as a very effective and humane Rat trap which I baited with peanut butter).

Set the trap as illustrated, either working with a friend to help support the weight, or using your knee to hold the cantilever arm in position. If you use the knee method make sure you don’t lean over the cantilever arm while setting the trap because it can flick upwards into your face with considerable force (Don’t ask how I know that).

Slowly lower the weight while holding the toggle in position, this can be tricky at first so be prepared to practice for a while. You may also need to adjust the position of the trigger arm, and the cantilever arm in order to set the trap effectively. The Cantilever arm and the trigger arm should be parallel with each other, and the string should run at 45 degrees to the upright.

This is a fascinating trap to learn, and one that could be a lifesaver in an emergency. But I must emphasise that the use of such traps may be illegal where you live, and also that I don’t consider the use of traps to be ethical unless used in a survival situation or for pest control where the risk of killing and injuring domestic animals such as cats and dogs can be controlled.