Hunting with an Air Rifle

Hunting with an Air Rifle If there’s one subject that seems to divide opinion within the Bushcraft community more than any other, it’s the use of Firearms and Air rifles for hunting. Traditionalists may argue that these are modern inventions which have no place in the world of primitive living skills.

Some may feel that guns have been tarnished by connections with warfare and violence, and others may claim that hunting with a gun is too easy, and isn’t as “sporting” as hunting with a Bow and Arrow or other traditional method. 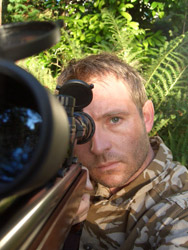 I personally feel that the responsible use of firearms and air weapons are valid survival skills, which can be used to provide a regular supply of fresh meat, furs and feathers, as well as being a humane way of controlling vermin such as rats. Even if Bow hunting were legal in the UK (Which it’s not), it would require hundreds of hours of practice to become proficient enough to hunt game effectively and humanely, whereas most people can learn the basics of rifle shooting in a few hours. Another factor that I feel makes shooting a worthwhile pursuit is that it teaches us many of the same skills that would have been used by our ancestors in their hunting expeditions. These include Stalking, Camouflage and Concealment, Tracking, Patience, and knowledge of the game we are pursuing. These skills are particularly important with an air rifle, because the reduced power and range means you have to get closer to the game in order to achieve a successful hunt.

This ownership of a “Real” firearm requires a license which is obtained from the Police. In order to apply for a license you will have to complete a lengthy form, pay a fee of £50 and supply character references and a medical declaration from your doctor. You will also need to keep the gun in a locking gun safe, and have permission to shoot over land which has been inspected and approved as safe for the calibre you intend to shoot. If all of this sounds like too much trouble you may wish to consider purchasing an Air rifle with a maximum power of 12 Ft Lbs (6 Ft Lbs for a pistol). This is the maximum legally permitted power for an (Unlicensed) Air Rifle in the UK.

An Air rifle cannot be purchased by anyone under the age of 18, but you can borrow or receive one as a gift if you are aged 14 or older. For those of you who are under 14 you can still shoot, but only under the supervision of someone aged 21 or older. You must always have permission to shoot from the person whose land you are shooting on, (Preferably in writing). The laws relating to all forms of shooting are complex, and I cannot emphasise strongly enough how important it is for you to fully understand the firearms and game laws for the area in which you intend to shoot. Further information regarding the legal status of Air rifles and their use can be found on the website of the British Association for Shooting and Conservation BASC. http://www.basc.org.uk/en/codes-of-practice/air-rifles.cfm

As with any tool an Air rifle has the potential to cause serious injury and even death if it’s not used with respect. Air rifles are not toys, and it saddens me when I read about their use in criminal acts, or by those who don’t have the common sense to use them correctly. The irresponsible behaviour of a minority gives those who oppose shooting sports all the ammunition they need to enforce further restrictions on gun ownership, and hunting.

Types of Air Rifle There are hundreds of different designs of Air Rifle but the ones we are likely to use for hunting fall into two basic categories Spring piston Rifles- These are Rifles which use a powerful compressed spring and a piston to shoot a projectile. Normally they are categorised by the method used to “cock” the action before shooting. The most common types are Break Barrel, under lever, and side lever. The action of the rifle is primed by pulling down on the lever in order to compress the spring, which is locked in position by the Trigger mechanism. A pellet is loaded in to the chamber of the barrel, and when the trigger is pulled the spring is released pushing the piston forward through the Air Chamber. The air in front of the piston is compressed and pushes the Pellet through the Barrel towards its target. Twisted grooves known as “Rifling” are cut into the inside of the Barrel, and these give spin to the pellet allowing a much higher level of accuracy than a smooth bore barrel.

Spring Piston Air Rifles have been around for a long time. Many people like them because they are a self contained unit, requiring only a supply of pellets to keep shooting all day long. The downside is that they can often kick (or Recoil) when the trigger is pulled, thereby reducing accuracy. They also tend to be heavier than Precharged Rifles. Despite this I still use my old “Springer’s” on a regular basis. 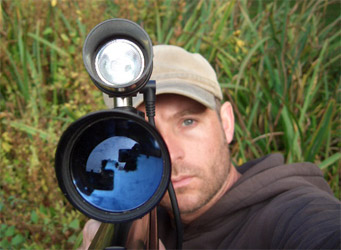 Precharged Rifles- These rifles, also known as pneumatic rifles use a reservoir (Or Bottle) of compressed Air instead of a spring to shoot a pellet. When the trigger is pulled, a valve allows a measured amount of air to push the pellet through the barrel. Despite being one of the oldest types of air rifle (lewis and Clark reputedly took a large calibre pre charged Air rifle on their Expedition of 1804-1806) Precharged Air rifles have become increasingly popular, and have revolutionised air rifle design over the past 10 years or so. They have negligible recoil so it’s very easy to hold the rifle on target, and with the correct sound moderator they are almost silent. Many also have a multi shot pellet capacity, which means that you don’t have to move from your shooting position in order to reload. The downside is that most of these rifles require a pump or separate air bottle to charge them up once the reservoir is empty.

There are numerous calibres (or sizes) of pellets made for air rifles, but the majority of hunters will opt for either a .177 or a .22. (.177 or .22 of an inch) The argument over which is best for hunting has been going on for years, and both calibres have their merits. When hunting with an Air Rifle, pellet placement is the most significant factor, and for most small game, a headshot is the only humane option. The “kill zone” of a Rabbit is not much bigger than a ten pence piece (I normally aim at an area just behind the eyes), so you need to be absolutely confident that you can achieve this level of accuracy before you take your shot. Wounding an animal is not acceptable. Rabbits are the largest Game I would consider taking with a legal powered Air Rifle, other possible game include Grey Squirrels and Wood pigeons.

In short a .22 pellet has more mass and a greater surface area so delivers more kinetic energy to its target on impact. This additional mass also means that the pellet will follow a more curving trajectory making range estimation more critical. A .177 pellet is lighter so it follows a straighter trajectory, being lighter it also reaches a greater velocity and many claim that it’s more accurate. With regular practice either calibre will do the job, so I’ll leave the choice up to you.

One of the most effective methods of shooting Rabbits is “Lamping” which is done at night and requires the use of a bright light often attached to the scope of a rifle. When a Rabbit is caught in the light its eyes are illuminated and it normally stops still long enough to allow a clear shot. Walking towards the direction of the wind will reduce the possibility of Rabbits scenting you before you get close enough, silence is also critical, so no talking, and tape down anything that can make a noise.

Shooting in the day can be more challenging, and my preferred method is to lie prone and downwind of the Rabbits, preferably from an elevated position where you can “snipe” at them when they emerge from cover. The maximum range for humane shooting of game with a legal powered Air Rifle is around 35 metres. Taking chance shots at greater ranges is likely to result in wounded animals, so be realistic and selective over your shots.

Well….. That’s a very brief overview of Air Rifle hunting. If you are interested in knowing more about this great and challenging sport there are many good resources of information out there, but please shoot safely and stay within the law.