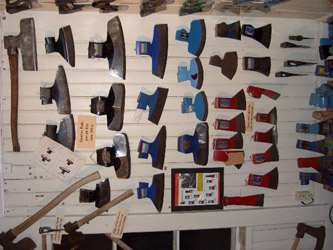 The effective and safe use of a knife is one of the most fundamental aspects of Bushcraft, a sharp blade with the knowledge to use it, enables us to make everything we need to survive in the outdoors. It can help us to shape a Bow drill set for fire lighting, make traps, skin and prepare game, as well as a million other jobs.

I have spent most of my life using knives for all sorts of tasks. I have also produced some basic blades from stock steel, but I’ve never forged a blade from scratch, So when the opportunity arose for me to learn how to make one of these essential tools, under instruction from one of the worlds most experienced blacksmiths, I jumped at the chance.

But this was to be no ordinary Blade, and no ordinary Blade making course. I would be heading to Sweden to attend the 5 day Damascene (Pattern Wielding) course at the Gransfors Bruks Axe Forge in Halsingland, Sweden.

This course is instructed by world class 5th generation Blacksmith Lars Enander who has spent the past 15 years running metalworking courses in close collaboration with the Axe Forge at Gransfors Bruks. As well as running courses Lars also writes textbooks, 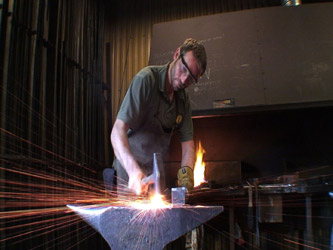 and along with his colleague and fellow blacksmith Ulrika Stridsberg, he forges unusual axes and broad-axes, many of which are made using pattern wielding techniques to produce tools which are as beautiful as they are functional.

I attended the course with my colleague and fellow instructor James Gourlay, who would be filming my progress for another episode of the A-Z of Bushcraft (Watch this space). We were so excited about the course that we decided to arrive early, so early in fact that the forge was closed (It was the middle of the night). Un-phased by the prospect of an impromptu camp out, we took our sleeping bags out of our Packs, and settled down for the night on one of the benches outside the forge. Shortly after dozing off we were woken by some of the bemused blacksmiths arriving for work at 5am, (they really are early birds in Sweden). This early wake up call gave us an opportunity to chat over a very early Breakfast, with some of the guys who made the Axes we have been using for so many years. 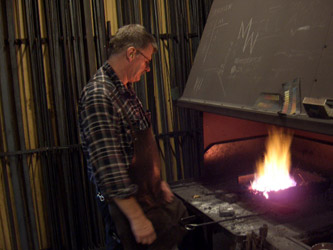 Later we would be taken to the delightful Café Gransfors, where we would be sleeping and eating for the next 5 days. I’m pleased to say that the food was fantastic, and the beds considerably more comfortable than the bench outside the forge.

The course we had signed up for is the 5 day Damascus Metalworking course. The term Damascus is often used to describe a blade which displays a pattern in the steel. The method of folding steel during forging was originally developed to improve strength and resilience of a blade back in the days when quality steel was difficult to obtain. By folding steels of various compositions together it would become stronger, as well as displaying a wood grain like pattern. Using modern methods and quality steels could best termed as pattern wielding as it is used more for aesthetic rather than practical purposes.

I had expected the first day of the course to be classroom based, with Lars pointing at a blackboard and testing my short attention span with reams of theoretical information about thermal dynamics, and carbon compositions. Fortunately for me Lars prefers to use a highly practical and hands on approach to teaching. 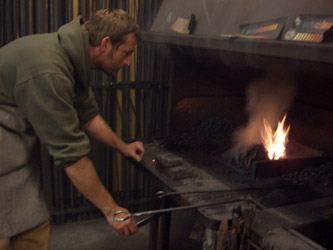 We were given a pair of safety glasses and ear plugs and shown how to light the furnaces using paper and kindling to get things started before adding the main fuel called Coke (a High temperature solid fuel made from Coal).

Next we were shown how to start the wielding process by heating a stack of seven steel slabs to a temperature of over 1000 degrees C (Or a bright yellow colour). The slabs consisted of a variety of different compositions including high carbon steel, nickel steel as well unalloyed steel. When these materials are wielded together and folded, they produce contrasting patterns within the finished blade. A small quantity of Borax is sprinkled over the work to help draw impurities from the steel.

Once the steel has reached its working temperature it is taken from the furnace, placed onto the flat of the anvil, and then hammered. The force if this hammering pushes the steel plates into each other, where they become wielded into a single piece.

Continuous heating and hammering is used to draw out, or lengthen the worked steel until it has approximately doubled in length. This is hard work, and by the end of the course my right arm had doubled in size, and some impressive calluses had developed on my hand, (No jokes please ;-) 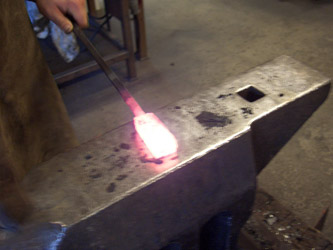 Once the steel has been drawn out to a suitable length it is partially cut at the centre using a tool called a Hardie Cutter or Fuller. The steel is then folded over the edge of the Anvil, more borax is sprinkled into the gap and the piece is returned to the heat. Once the two halves have been wielded together the first fold is complete.

This process of drawing out and folding is repeated four times, although it can be folded more if a more intricate pattern is desired. Traditional Japanese Samurai Swords were folded dozens of times, a process that would have taken many months and a lot of hard work.

Once the steel has been folded the desired number of times it can be treated in a number of ways in order to produce interesting patterns. One method is to twist the steel using a vice and an adapted adjustable wrench, another is to use an angle grinder to cut notches into the sides of the blade before further heating and beating. This is where you can get really experimental and creative.

By now we will have a blank of steel which doesn’t resemble a knife in any way. In order to start shaping the final blade we first produce the tang or handle. We used a special tool to cut into the heated steel, forming a neat transition from the blade to the tang. A full length tang is preferable for knives that will be used in Bushcraft.

The next stage is to use a cutting disk and belt grinder to shape the blade and the cutting edge or grind. A flat or Scandi (Scandinavian) grind with a single bevelled edge is typical of knives made in Sweden. This is the edge you will have seen on many Bushcraft knives.

Once the blade has been shaped and ground it is ready to be hardened and tempered. Hardening is necessary if a blade is to hold a good cutting edge, although a blade that is too hard can chip or snap easily, which is why the steel is then tempered.

In order to harden the blade it is heated to approximately 800 degrees C or a bright cherry red colour. Once it has reached this temperature it is quickly quenched in oil.

Tempering is achieved by running the spine and sides of the blade over a block of heated steel. It is important not to over temper the cutting part of the blade at this stage. Lars showed us how to gauge the temper by observing the colour changes in the blade. A blue tinge signified that the right level of temper had been reached.

After hardening and grinding, the blade is polished on an abrasive polishing wheel before being placed into a container of sulphuric acid for several hours. This acid eats into the steel exposing the patterned layers of nickel underneath. This acid is nasty stuff so this part of the process should always be done outside.

The final stage is to give the blade a final polish on the abrasive wheel before excitedly showing everyone around you the beautiful patterns you have created. Forging a blade from start to finish really does give you an incredible sense of achievement.

The 5 day Damascus Metalworking course is something I’d definitely recommend to anyone with an interest in blacksmithing and custom knife making. The course fee is inclusive of Lunch and Refreshment breaks.