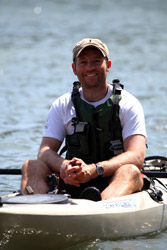 Fishing from a Kayak has been a tradition in my family for as long as I can remember. Every summer my father would come home with as much Bass and Mackerel as we could eat, and the excitement of catching my first “real” Fish will stay with me forever I was seven or eight years old and sat in the back of my Dads ancient home built, canvas and wood PBK (Percy Blandford Kayak).

The cold salty spray ran down my face as we paddled our fragile boat dangerously close to the jagged rocks of the South Gower Coast. The heavy “Whump” of the swell pushing into a deep water gully reverberated in the still morning air, as I held my hand line tightly to my chest in anticipation of a bite. Somewhere, trailing behind us through the dark water, a shiny brass Toby spinner went about its business.

Despite the obvious potential for disaster I felt completely safe in my faded “Mae West” lifejacket that had probably been washed ashore in World War II, but a little concerned for my father who refused to wear a lifejacket, insisting “A captain must always go down with his ship”.

Suddenly the line pulled tight. “We’re in” I shouted while pulling sharply on the line as I’d been shown. I’d rehearsed this moment in my head a thousand times, but this was the real thing. My dad dug the paddles deep into the water, turning the kayak and paddling out to sea as fast as he could. “Don’t let the line go slack” he shouted, as I laboriously wound in the Monofilament line.

My skinny arms burned from the exertion, my heart racing with excitement, and after what seemed like hours I looked behind us, over my shoulder to see something break through the surface. Silver scales reflected the sunlight as it rolled onto its side, Tail thrashing, rainbows briefly forming in the spray as his dorsal fin cut through the surface of the water. 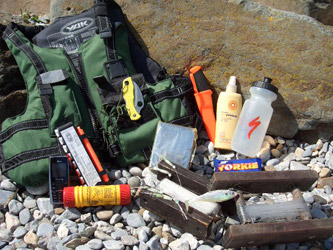 As I brought the Bass alongside the Kayak his head broke through the surface of the water. A huge head, eyes the size of 10 pence pieces, mouth open wide with the treble hook of the Toby spinner hooked into one side. I had to use both arms to lift this monster out of the water, knowing that if the tail was still in the water he had a chance of escape, and that was unthinkable.

Taking care to avoid the sharp dorsal spikes along the spine (They can cause a nasty infection) I passed the line to my Dad, who checked that it exceeded the minimum legal length before using a priest (cosh used to deliver the last rights) knocked the Bass at the base of its skull and put it into a canvas bag. I always feel a sense of regret at this part of the story, but as my Dad said “if we are to eat meat and fish, we should be prepared to take responsibility for how it’s caught and killed”.

Since that memorable day back in the late 1970’s Kayak fishing has become a hugely popular activity, and as with most other sports, technology has revolutionised the equipment and techniques, but the basic principles remain the same. 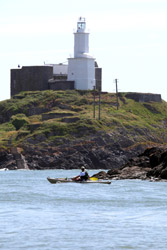 Despite my father’s claims that he invented Kayak fishing, its roots date back over 4000 years to the Ainu, Aleut, and Eskimo hunters of North eastern Asia, North America and Greenland. The original Kayaks were tailored to the specific requirements of the hunters who made them for Seal hunting in the Icy waters of the northern latitudes. The name Kayak means “Mans Boat” or “Hunters Boat”. They are traditionally propelled using a two bladed paddle and have an enclosed cockpit, covered with a “Tuilik” or spray deck, which keeps the users lower body dry. The Inuit craft was constructed using a driftwood frame (timber was a scarce commodity), covered with Seal Skins, and the spray deck was often made from Seal Gut.

Most modern Kayak fishermen and women use “Sit on tops” or sealed hull Kayaks which are rotomoulded from Polyethylene. These ultra stable craft are excellent for general purpose fishing, recreation and light touring. Many are specifically designed and outfitted for fishing, with rod holders, and other gizmos. Because you are not sitting inside the hull, you can change position easily, and if you feel like going for a swim you can jump off, and climb back aboard without too much difficulty.

I like to think of a Kayak in the same way as I view a Bicycle on land. Every design lends itself to a specific application. You won’t see many Cyclists entering the Tour de France on a BMX, and in much the same way your choice of Kayak should be made with a view to what you will use it for. My Sit on top has plenty of storage space for overnight touring, and trips of several days in moderate conditions, but if I intended to go on any long expeditions I would be considering a specific sea touring Kayak, with an enclosed cockpit and waterproof storage hatches. 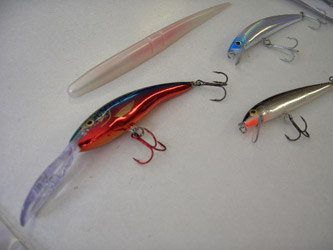 Another factor that has changed greatly throughout the years is fishing equipment and particularly lures. Since the 1970’s Bass have developed very expensive tastes and it is quite possible to spend over £10 on a new fancy lure. But in my experience many of the cheaper lures are just as good, and what you need to be asking yourself is “If I were a fish, would I want to eat that”? Bass and Mackerel are predators and will strike at anything that resembles their usual food source. When you gut a fish take time to examine its stomach contents for an idea of what it likes to eat. During the summer months Sand Eels and Whitebait come close to shore and many lures will attempt to emulate the looks, and movements of these bait fish.

I don’t often use a rod while fishing from a Kayak, preferring instead to use several hand lines. Rods are used for casting the bait out to sea, so if you’re already on the sea what’s the point? I keep one hand line set up for bass and another rigged with mackerel feathers. Depending on the time of tide or where I’m paddling, I will alternate between them for the best results.

Unfortunately since I first started fishing the numbers of all Fish have diminished significantly, and Bass in particular are getting fewer and harder to catch. This can largely be attributed to over fishing by commercial trawlers. Pointing the finger of blame may be very easy, but we all have a responsibility to ensure that fish stocks are maintained at a sustainable level. The current minimum legal size for a sea Bass is 40cm, and there are proposals for this to be extended to 45cm in 2010. This size restriction allows fish to breed at least once before they are caught, so I would encourage everyone to voluntarily adopt the 45cm minimum in anticipation of this change. The penalties for being caught with an undersized fish are severe, but not as severe as the extinction of a species.