Andrew was born on the 15th of February 1974. Since then he has spent every spare moment in the pursuit of Adventure. He has travelled extensively all over the world in order to study the traditional skills of indigenous peoples including the Orang Astli people of the Cameron Highlands in Malaysia, as well as the native inhabitants of Australia and Canada. 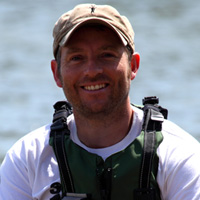 He is an experienced practitioner of a wide range of outdoor pursuits including Kayaking, Cycling, Rock Climbing, and Mountaineering. He is also passionate about Film making and the Dramatic Arts, graduating in 1997 with a Degree in Media and Theatre studies. This background in performance arts lends an infectious spontaneity and energy to his teaching.

"I first became interested in learning how to live in the outdoors at a very young age when my Father showed me how to catch sea Bass and Mackerel around the Gower coast, from an old Canvas and Wood Kayak. Later, I would spend every spare moment exploring the woods close to my home, or reading about the great explorers and their exploits. At the age of eighteen I took part in a Raleigh International expedition to Malaysia, an experience that would change my life and set me on the course to travel all over the world, and to discover all I could about the natural world and the lives of its indigenous people.

Dryad Bushcraft was started a few years ago with funding from the Welsh assembly sustainable development fund. My objective was to provide courses in the techniques of sustainable living through the medium of Bushcraft and other outdoor activities. Dryad Bushcraft now runs courses for a wide range of individuals and organisations throughout Wales, and we are continually designing new courses and activities in order to keep things interesting. One of our newest developments is the ability to offer a range of Welsh language Bushcraft and Survival courses, which are proving extremely popular." Andrew Price Head instructor of Dryad Bushcraft.

Andrew Price is the presenter and technical consultant for the online Bushcraft and Survival Skills series 'The A-Z of Bushcraft'. This series has been running for over 3 years and has built up a strong following throughout the world . The first series has also been produced as a DVD.

Clips from the Coast and Country series can be seen here: http://www.itv.com/news/wales/topic/coast-and-country/

A cookery programme called "A Chef Abroad" presented by TV Chef Michael Smith. Andrew showed him how to forage for mussels and other coastal delicacies.

Andrew has been a guest or expert on several programmes.